In 1943 Abraham Maslow published the pivotal work on motivation, known ever since as Maslow Hierarchy of Needs. Maslow showed that what makes all people do the things they do, and why they do those things, can be ranked in a simple hierarchy often depicted as a pyramid as in Figure 1. 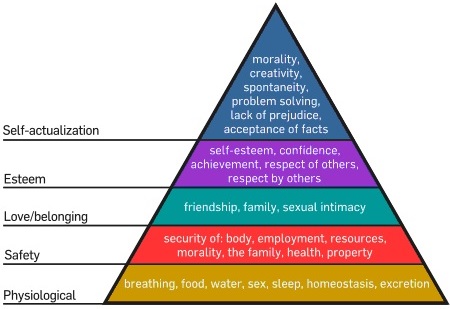 As complex as human beings are, Maslow's straightforward model accurately captures what makes them tick. It is a testimony to Maslow's astute observation that we now take it for granted.

At the bottom of Maslow's pyramid are physical survival level requirements, such as air, food, and temperature control. Above it are personal and family safety, then friendship, self-esteem and achievements, and topping the pyramid is fulfilling ones' true potential. Not all needs are equally important, and only once a person has satisfied a lower need can that person develop interest in satisfying a higher-level need. Conversely, if a lower level is suddenly denied, people will lose interest at the higher level they were at and will aspire to satisfy the now missing lower need. For example, someoneing through a family crisis (a threat at level 3) will often experience a serious drop of productivity and interest at work (level 4).

Using Maslow's terminology as much as possible the project needs can be classified into five levels: physical, safety, repeatability, engineering, and technology:

We constructed the pyramid by first listing all necessary ingredients for success of a typical software project, and then prioritizing and sorting them. We then grouped the elements of success into categories of similar criticality.

The sorting was done using a simple Ishikawa-like analysis based on common sense and experience. For example, in deciding if architecture is more or less important than technology, we considered two projects: the first with a tightly-coupled design, high cost of maintenance, low level of reuse, difficult extensibility, but with a team that uses the latest and greatest technology. The team has in fact mastered the technical domain and the related methodology. The second project has a decent (not even great) architecture, with relatively loosely-coupled components, a modular approach with layers and the right abstractions, the requirements volatility is encapsulated and there is some potential for reuse and extensibility across versions. However, the technology for that project is out of date, is not optimal for this project, there are new team members than are not familiar with the technology, and the tools leave much to be desired as far as productivity and automation. We asked ourselves: which project will have a faster time to market with a new feature? Which will have lower cost of ownership? Which will have higher quality? Which project will benefit from a lower staff turn over rate? Which projects will have the team members with higher motivation and effectiveness? Which projects we would like to be part of? The answer unequivocally is of course the second project, so architecture must therefore rank lower in the pyramid of needs compared with technology. Similarly there is no point in having a great architecture if the project is not given enough time and resources to build it (safety in the pyramid) or if there is no business model that will ensure viability of the business to keep the lights on (the first, physical level).

The analogy to a person hierarchy of needs is very appealing because it prioritizes various needs and prescribes how something as complex as a software project thrives or fails and why. Often projects fail in spite of heroic efforts of the team and the project leads. The reason is invariably a failure to satisfy a lower need (such as adequate funding or risk management), while spending the effort at a higher level such as mastering the technology. In fact, we see such inverted pyramids as the dominate cause of failure of software projects. Much like a person, there isn’t a single thing, or even a single area of needs that assures a project success. Common models describing how a project should behave (from CMM to Agile) fall short because they tend to be unidimensional, focusing on a single axis such as the process or the architecture. It is the proper intersection of multidimensional aspects that assures the project's success. It is up to the project leads to manage and execute all aspects from safety via project design to engineering excellence via architecture and then mastering the technology. What is perhaps now more evident is the relative importance of these elements, and therefore the time that should be spent perfecting and controlling the project hierarchy of needs.

IDesign's Architect's Master Class maps well to the top three layers in the project's pyramid of needs. The Master Class shows the architect how to take an active leadership role on the process, the design and the technology, as a continuum, since all three have to work in concert.